Unfortunately, I find this true about most of my games and have been trying for some 40 years to overcome it!  The AAR for this game, in two parts, is up on my other site:  http://kingstonirregulars.blogspot.com/

CHARGE!
There are no lead widows 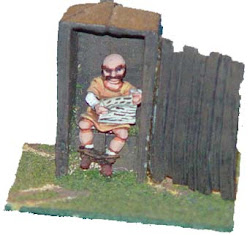 Dick Bryant
My Wargaming Resume: Editor and publisher of The Courier Magazine for 40 years and participant in the famous Meeting in Wally's Basement that resulted in the formation of HMGS. Gamemastered at every Historicon and many Cold War conventions over the years; ran the first Ancient Tournaments at Historicon (4th and 5th Edition WRG !). Recipient of the Jack Scruby award from HMGS after Don Featherstone and am a founding member of The HMGS Legion of Honor. I game in every period but am particularly interested in WWII and The Korean War (Cross Fire), WWII Naval (See Kreig V), Colonial (TSATF), Wild West (Desperado - much modified), Napoleonic (Home rules and CL and S),Medieval (Day Of Battle),Check your 6 and Arc of Fire. I will be posting on all these - scenarios, results of games at Kingston Irregulars(my club) and Cross Fire as it pertains to the Korean War. I also hope to review new items and rules. I welcome all your inputs for discussion.

-Gamers who equate unlucky dice with bad generalship or visca versa. -Gamers who shake the dice for an interminable amount of time - as if it would make a difference. -Gamers who as side commanders use their subordinate players as extensions of their fingers, telling them every move to make. Give your subordinate a mission and the troops to accomplish it then stand back! - The use of Corp as single for Corps or Moral for Morale! - Gamers who play the rules rather than the situation: E.g. A gamer who occupies a hill because THE RULES give it a +1, not because it makes his attackers' job more difficult. I'd love to hear of your pet peeves - send them in!
A TIMELINE OF THE HISTORICAL MINIATURES WARGAMING HOBBY

CROSS FIRE AND HIT THE DIRT ARE COPYRIGHTED